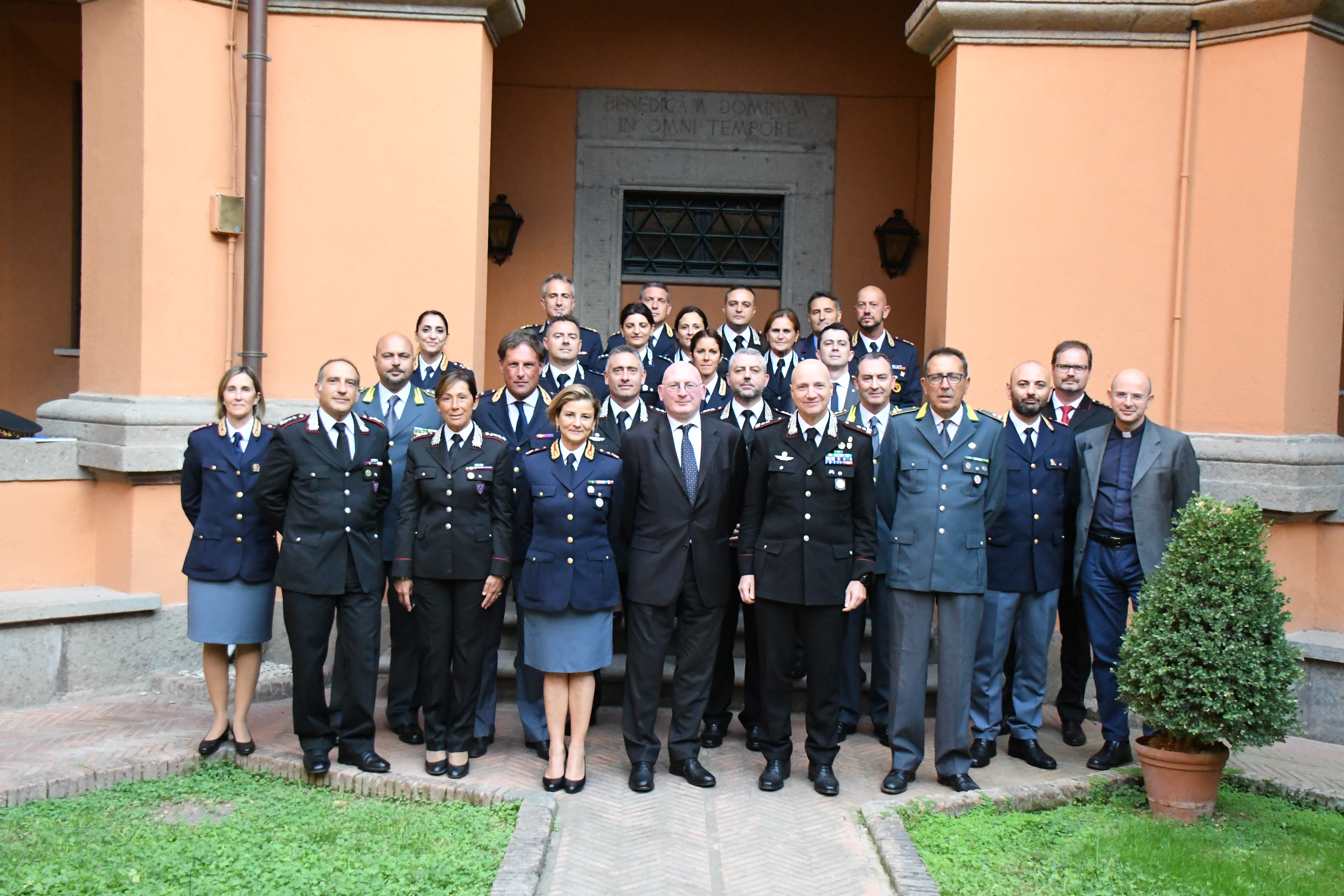 The Director of the Scuola di Perfezionamento per le Forze di Polizia welcomed the Senior Police Officers/Officials attending the XVIII Advanced Training Course who, on 19 September 2022, started their management grade law enforcement training activity. This event was held in the presence of the Deputy Director General of Public Security Department, in charge of Police Forces’ Coordination and Planning, Prefetto Stefano Gambacurta.

This training activity, which is focused on the new challenges to security, was started with a short welcome ceremony held at the “Prefetto Carlo Mosca” Lecture Hall  at our Academy. Several Senior Police Officers/Officials of the different Police Forces, as well as foreign police auditors who attended the XVII Advanced Training Course, which concluded last June, also participated in this event. This participation represented a kind of handover between the two groups of trainees.

Both the Academy Director and Prefetto Gambacurta underlined the importance to set up a “community” among the trainees, that is to say  a network of professional and human relations affecting  their whole professional life and representing the real “added value” of this course. Moreover, the Academy Director and Prefetto Gambacurta emphasized the importance to develop a trend to make changes and to be opened to the wide social, economic, academic and institutional  contexts, which must be daily  faced by  Management Grade Police Officer/Officials.

Then, the leader of the XVII Advanced Training Course, Carabinieri Corps Colonel (t.SFP qualification) Michele Cucuglielli, as well as the other trainees belonging to the different Italian Police Forces, expressed their good wishes, together with the First Lieutenant of the Ukrainian Police, Artem Burtak, who participated by videoconference and represented the other foreign auditors  who, last June,  concluded their training activity with the Italian colleagues.

The Advanced Training Course, having an Academic Year duration, is aimed at honing the scientific –professional expertise of Management Grade Police Forces’ Officers/Officials,  as well as at improving their decision-making skills by providing them with joint methods and techniques in the fields of law enforcement organization, development and coordination.

Also this year the Course training activity will be based on four traditional learning areas: “law enforcement coordination and fight against organized crime and terrorism”; “international cooperation”; “social, economic and communication sciences”; “public management”. As in the case of the previous Academic Year, the curriculum of the XVIII Advanced Training Course will include the study and the deep analysis of the impact and consequences deriving from innovative strategic initiatives provided for by the National Recovery and Resilience Plan (NRRP) in relation to the whole security system as well to the development of a kind of training strongly focused on the European and international dimension of criminal phenomena.