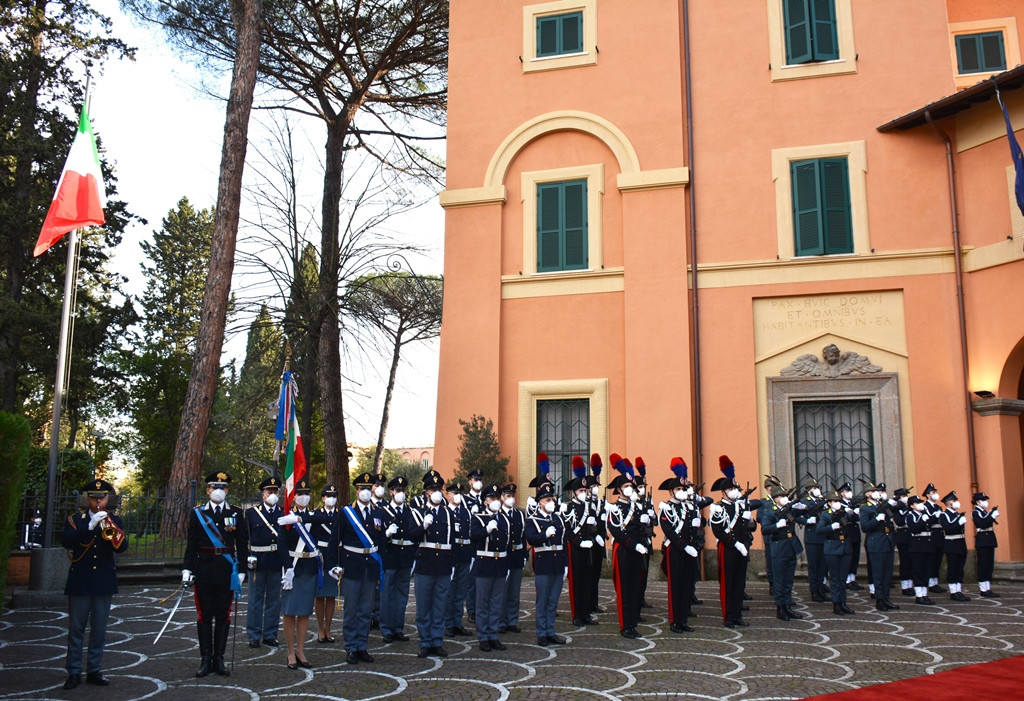 On 11 January 2022, the Opening Ceremony of the Academic Year 2021/2022 was celebrated at the Scuola di Perfezionamento per le Forze di Polizia (Interagency Law Enforcement Academy of Advanced Studies) of the Public Security Department, in the presence of the President of the Italian Camera dei Deputati (Chamber of Deputies), On. Roberto Fico, who was welcomed by the Minister of the Interior  – Member of the Consiglio di Stato – Prefetto Luciana Lamorgese, together with the Chief of the Italian National Police – Director General of Public Security Department – Prefetto Lamberto Giannini, as well as the by Academy Director –  the Carabinieri Corps Major General Giuseppe La Gala.

The Ceremony was attended by the Minister of Justice  – President Emeritus of the Corte Costituzionale (a special Court dealing with consitutional and ministerial matters)  Professor Marta Cartabia,  the leaders of Police Forces, the President of the Italian Administration School –  Professor Paola Severino, as well as by the 22 trainees of the XXXVII Advanced Training Course including 2 foreign Senior Police Officials, the trainees of the XLVII Crime Analysis Course and by outstanding representatives of the institutional and academic circles.

The President of the Italian Camera dei Deputati, after passing in review the interagancy honor platoon deployed with the Italian National Police flag,  reached the Reception Hall, where he met the highest authorities and, as usual, put his signature on the  book of honor  to commemorate this event.

In his opening speech, the Director underlined that the main goal of the Academy is to go on following the excellent route outlined 40 years ago, thus further sharing the analysis on the topics concerning interagency coordination with other Italian and foreign institutional  partners, and adopting a training approach based on the fundamental principles of interinstitutionality and internationality.

In particular, the advanced training aimed at improving the decision-making skills of the future management grade police officers/officials attending the Advanced Training Courses will be delivered by means of the introduction of new modules on  management and institutional communication capacities, in cooperation with the most important Universities, as well as by reviewing the curricula,  taking into account the Recovery and Resilience Plan (PNRR according to the Italian acronym) which represents the challenge they will have to face in the near future.

Moreover, the Academy Director stressed the importance of several  technological and logistic innovations related to the Academy infrastructures (the restyling of which, also as regards the digital technology, is underway and almost completed). In addition, he underlined  the relevance of the other two branches of the Academy, that is to say the Scuola Internazionale di Alta Formazione per la Prevenzione ed il Contrasto al  Crimine Organizzato di Caserta (the Caserta-based International Advanced Training Institute for the Prevention and the Fight against Organized Crime) as well as the SISFOR (according to the Italian acronym) – E-learning Advanced Training System. Despite being separated from the main structure the Academy, these two branches are an intergral part of it and represent  a strong push for change.

After the Director’s speech, the President of the Italian  Camera dei Deputati took the floor and addressed a welcome speech to the participants. He underlined that Public Administration need to be subject to a constant updating of competences, since it must be adjusted to the developing social and economic context which is increasingly connected to the international scenario.

The traditional lectio magistralis, entitled “Training in Public Administration: a challenge for the future of Italy”, was delivered by Professor  Paola Severino, who highlighted the relevance represented by the Recovery and Resilience Plan (PNRR according to the Italian acronym)  for the strategic development of the whole Public Administration as well as for the creation of a training model based on the principle of long-life learning. She explained that the new government project “to reform Public Administration and recruit qualified persons to foster the growth of  our Country” has been recently presented to reach  that purpose.  It is a strategic plan aimed at optimizing and developing the human resources in the Public Administration.

It represents an extraordinary digital and academic training and refresher  plan, which is scheduled to be implemented  along with the whole Recovery and Resilience Plan, by means of a partnership with important players belonging to the academic and  entrepreneurial circles, in the awareness that and efficient training pattern must provide for a close interaction among the public training institutes, including police forces academies,  the entrepreneurial bodies and other foreign  training  schools.

Finally, the Minister of the Interior took the floor and underlined the important role of police forces training institutes in spreading the ethical principles of public management and, at the same time, the inestimable value of coordination activity to avoid the fragmentation of public administration, not only in the  field of security but in all those sectors in which public functions are performed. After addressing her best wishes to the Senior Police Officers/Officials attending the Courses, Minister Lamorgese, in line with the usual procedure, officially declared the opening of the Academic Year 2021-2022.