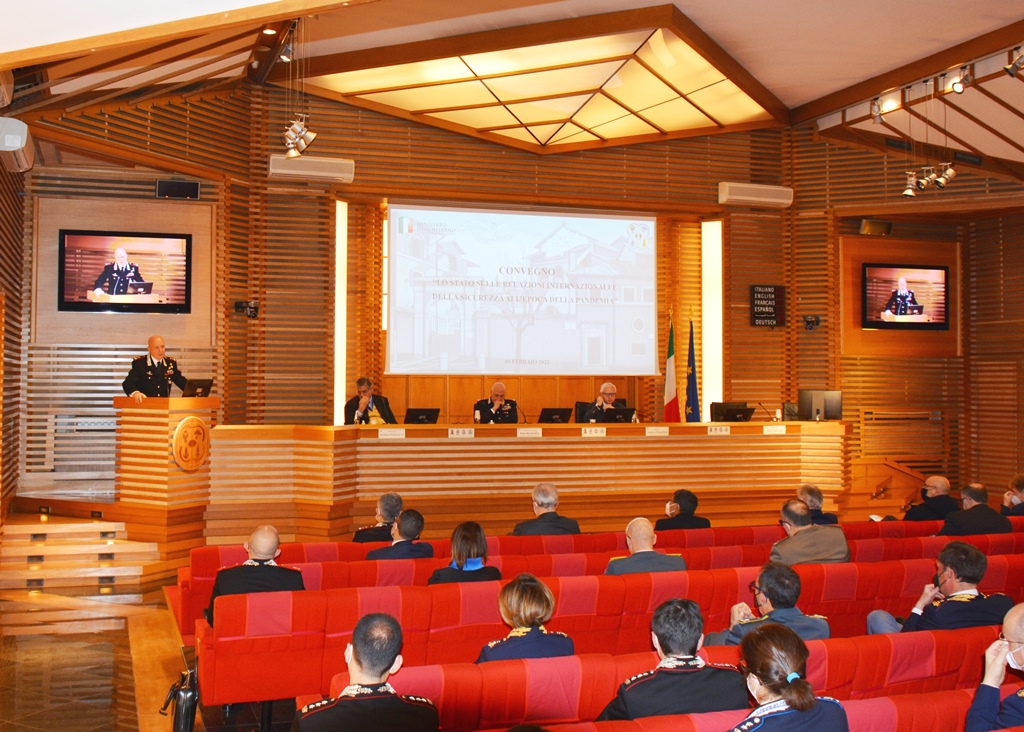 On 9 February 2022, the conference on “International relations and security conditions during the Covid-19 pandemic” was held at the Prefetto Carlo Mosca Conference Hall in the Scuola di Perfezionamento per le Forze di Polizia. This conference is part of a set of seminars concerning the geopolitics and represents one of the training initiatives provided for by the curriculum of the XXXVII Advanced Training Course.

This meeting, which was skillfully led by Mr Andrea Margelletti, President of the Centro Studi Internazionali (Ce.S.I. according to the Italian acronym – Center for International Studies), who is an appreciated expert in the field of geopolitical phenomena, was opened by the Director of our Academy, Carabinieri Corps Major General Giuseppe La Gala. Our Director took this opportunity to thank the lecturers and welcomed the participants, both those in presence and those connected by video-conference. General La Gala underlined the topical issues which were dealt with during the meeting, and focused, in particular, on the close connection between internal security and the balance in the international relations, as well as the need to understand the different factors affecting the territorial integrity, the economic freedom and the social, political and religious security in the different countries.

Ambassador Stefano Pontecorvo, who had been a leading figure in the last crisis in Afghanistan, provided an interesting overview of the Italian foreign policy in relation to the challenges to be faced by Italy in the next future, in particular in the field of bilateral relations with the countries surrounding the Mediterranean Sea. His interesting analysis focused on the need for Italian foreign policy to be provided with autonomy and to get a leading role, due to the Italian capacity to be open to dialogue, making reference to the pillars represented by Europeanism and Atlanticism.

Then, Lieutenant General Enzo Bernardini, Deputy Commander General of the Carabinieri Corps, exhaustively illustrated the importance of the stability policing as an autonomous military activity to cover the security gap in the intervention scenarios abroad, as well as an instrument to be used in the national defense and security policy. These activities facilitate the fulfillment of strategic, military and political objectives in a framework of stability, by means of the noteworthy support aimed at setting up, training and instructing local police forces, thus bringing abroad the Italian police pattern.

Mr Pietro Schiavazzi, journalist and professor of Vatican Geopolitics, provided an original and new approach to international relations by means of an analysis of the Encyclical Letter Fratelli Tutti (All Brothers), making reference to the topic of universal fraternity as the fundamental tool to face the geopolitical crises deriving from the Covid-19 pandemic. In this framework, he also offered some interpretations of the geopolitical initiatives implemented by the Vatican in some crucial strategic areas of international politics, such as Asia and Pacific region.

Mr Stefano Vespa, Journalist of the Panorama news magazine, as well as of the Formiche.net web magazine, underlined the role and responsibility of mass media in the period of Covid-19 pandemic, dealing, in particular, with the issue of reliability of information and, in general, with the problem of fake news affecting security conditions at national and international level.

Then, Mr Lucio Caracciolo, Director of the well-known Italian magazine of geopolitics “Limes”, illustrated the topic concerning the role of Europe in the balance between United States and Russian Federation, and focused on the difference between Europe and other foreign countries, in particular the world superpowers such as United States, Russian Federation and China, as well as those countries which are increasing their power, such as Turkey.

The meeting concluded with an interesting and alluring debate led by Mr Andrea Margelletti, during which the trainees of the XXXVII Advanced Training Course and those of the 47 Crime Analysis Course had the possibility to further analyze  some topics dealt with on that occasion.