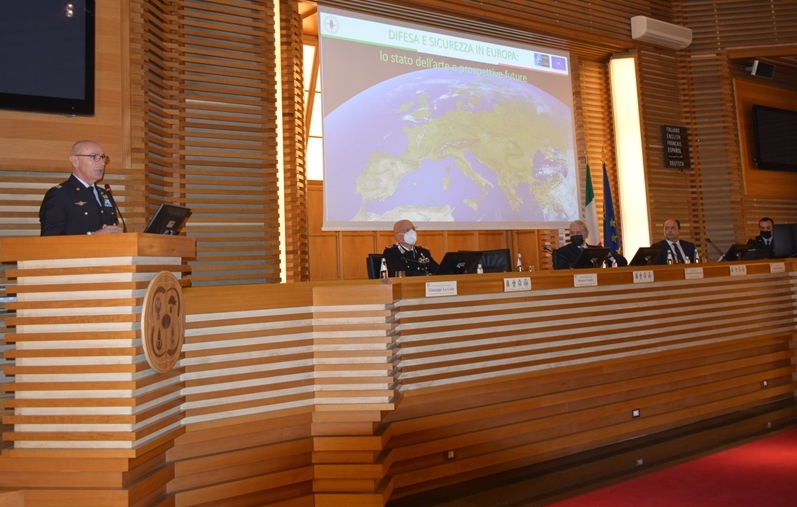 On October 5, 2021, the conference on “Defence and Security in Europe: the current situation and  future perspectives” was  held at the “Prefetto Carlo Mosca “ Lecture Hall in the Interagency Law Enforcement Academy of Advanced Studies. This event was promoted by the “Diplomatia” association, a non-profit entity having  cultural purposes and with a geopolitical dimension, aimed at the spreading of knowledge on the main international issues as well as of information on those countries having diplomatic, political and cultural  relations with Italy. This association  relies on the cooperation of competent Italian and foreign lecturers as well as of very important persons who are well-known at international level.

The most important moment of this event was represented by the lecture delivered  by the Italian Military Representative at the NATO and EU Military Committees – Lt. General Roberto Nordio. This ceremony, moderated by Mr. Giovanni Cinque, Project Leader of the Defence and Security Team of Diplomatia, was held in the presence of more than 50 participants  belonging  to the cultural and institutional milieus, such as the Carabinieri Corps Lieutenant General Gaetano Maruccia, Commander of the Mobile and Specialized Units Command, Prefetto Cinzia Guercio, Deputy Chief of the Fire Brigade Department,  as well as the President of the Foreign Trade Institute, Carlo Ferro.

The Director of the Interagency Law Enforcement Academy of Advanced Studies, Carabinieri Corps Major General Giuseppe La Gala,  opened the session, welcomed the authorities as well as all the participants and explained that the courses held at the Academy deal not only with the traditional topics concerning police force’s activity but also those concerning the so called “ ecosystem of security”, taking into account that nowadays the maintenance of public security involves different issues which are deeply interrelated: geopolotical and  economic relations, military defence policies, etc.

Then, Ambassador Giovanni Castellaneta,  who is the President of  “Diplomatia”, took the floor and stressed that the concept of defence is deeply changing, and that it is increasingly linked to economic aspects and new trends in international relations. Moreover, the Ambassador underlined  that the European Union is evolving from a condition  of security user to a condition of designer of an internal and external defence integrated system.

General Nordio, in his capacity as privileged observer of the NATO and EU defence policies, delivered a detailed lecture describing the characteristics and the activities  carried out  by the military committees established inside  the two above-mentioned bodies and underlined the different strategic approaches they adopted in the field of security and defence, as well as the threats and the main operational scenarios characterizing the two international organizations.

A special attention was focused on the most recent initiatives aimed at overcoming the current weaknesses in the European and Atlantic defence policies, which are characterized by the need to get  general consent as well as by the consequent lenght of the decision-making procedures. Moreover, it was pointed out that these policies are no more appropriate to face the increasing  security challenges  for the countries and the individual citizenzs.