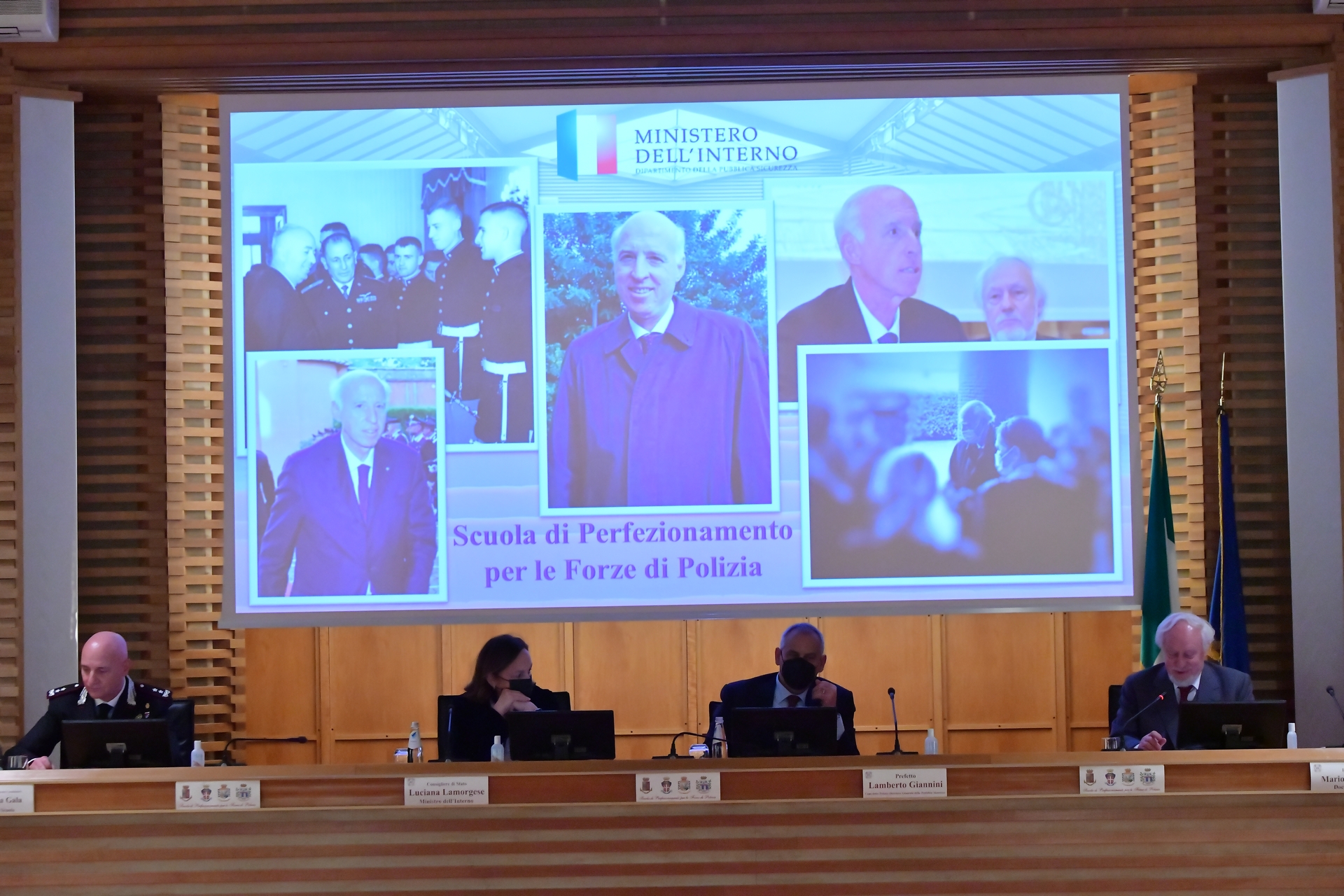 On 30 April 2021, on the occasion of the thirtieth day after the death of the late Prefetto and State Councilor Carlo Mosca, the celebration for the dedication  to him of the Lecture Hall at the Interagency Law Enforcement Academy of Advanced Studies was held.

This event was  symbolically very important for our Academy as well as for all the persons who had the opportunity to know him. As a matter of fact, this celebration  was aimed at praising the memory of Prefetto Mosca who had a special link with the  Lecture Hall of our Academy, where he  carried out most part of his training activity.

This event was attended by the Minister of the Interior, Prefetto and State Councilor Luciana Lamorgese, as well as by the Chief of Police- Director General of Public Security Prefetto Lamberto Giannini, by the Heads of Police Forces  and by Prefetto Mosca’s son Davide Mosca. Moreover, the trainers and the trainees of the XXXVI Advanced Training Course participated in this short celebration and they symbolically  represented also  the 35 previous Advanced Training Courses, which were delivered  when Prefetto Mosca was Tenured Professor of “General Theory of Coordination and Fight against Organized Crime and Terrorism”.

At the beginning of the ceremony, the Academy Director, Major General from the Carabinieri Corps Giuseppe La Gala, took the floor. He underlined the substancial  heritage of values left by Prefetto Mosca, which consists of two main aspects: the imporance of the study and ongoing  deep knowledge of the topics concerning security as well as the value represented by the role of  public authority in the field of security which must be inspired to the protection of fundamental rights through  the proper balance of the powers awarded to this purpose.

Then, Professor Mario Morcellini, who is the representative of the trainers of the Advanced Training Courses as well as Tenured Professor of “Communication, Networks and Social Research” took the floor. He praised the figure of the late Prefetto Mosca and underlined his capacity to spread, through  his feeling of  empathy and his personal  and polished communication skills, the fundamental values of the State and of democracy, merging them into a common “culture of security”. Moreover, Professor Morcellini also reminded the extraordinary capacity of Prefetto Mosca to stand out  in every field in which he carried out his activity: he was not only a committed high representative of the State but also an  enthusiastic and multifaceted  trainer. Professor Morcellini underlined also that Prefetto Mosca performed his activity also as coordinator and often as director of magazines  and was the point of reference for several series of books and scientific publications.

The son of the late Prefetto, Mr. Davide Mosca, reminded the “smile of the soul” which characterized his father’s face every time he was invited to deliver a training activity at our Academy and emphasized the valuable example of loyalty to democracy and institutions he has always represented as a committed high ranking public servant: he was a “sower of  values” as he himself loved to be called, who devoted himself to the spreading of moral values in all the fields of public administration.

Finally the Minister of the Interior, Prefetto and State Councilor Luciana Lamorgese, took the floor. She underlined the role performed by Prefetto Carlo Mosca who represented a point of reference for the whole Administration of the Ministry of the Interior and the importance of his opinion as a researcher and a man belonging to the institutions, who has always been respected and esteemed. Moreover, Prefetto  Luciana Lamorgese reminded his deep  kindness as well as his open-mindedness and availability towards everybody, regardless of the rank of the persons with whom he interacted.

At the end of the speeches delivered by the above-mentioned prominent lecturers,   a simple and moving celebration of dedication of the Lecture Hall to Prefetto Mosca was held and a commemorative plate was uncovered bearing the new inscription: “Auditorium Prefetto Carlo Mosca”. Then, the dedication paper  was delivered to his son Davide.

This initiative represents a tangible sign to remind the never-ending activity carried out by Prefetto Mosca to promote our Academy to the level of  “Temple of training in the field of security”,  according to the definition  he was used to give.