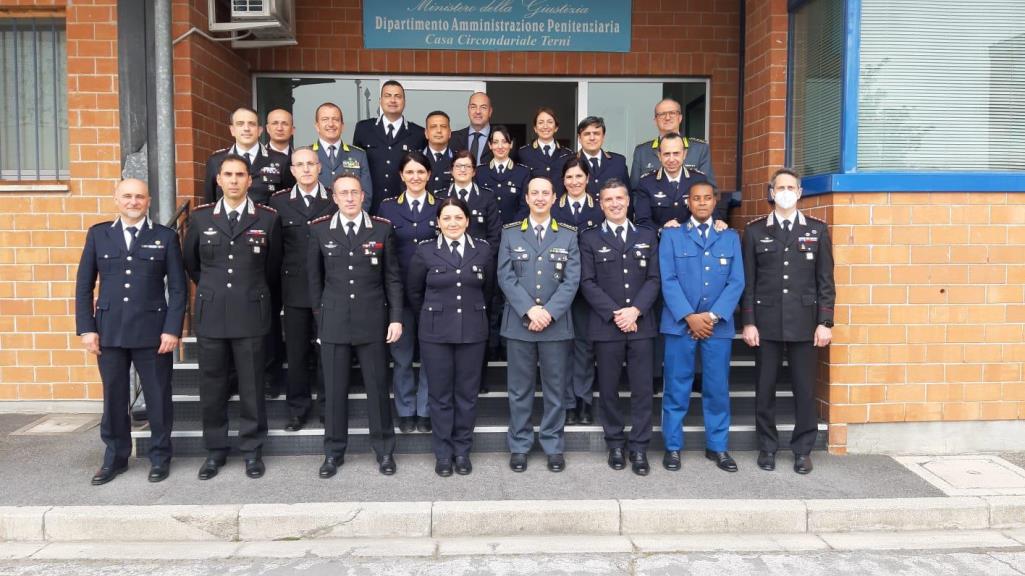 The XXXVII Advanced Training Course devoted two days of its training activity to visit some bodies of the Prison Administration. As a matter of fact, this fundamental phase of the Advanced Training Course is intended to provide for a deep knowledge of the most important and peculiar services operating inside each Police Force.
In particular, on 16 March 2022, the delegation, composed of the trainees attending the Course and led by the Head of the Experimentation Section of the Academy, Dir. Agg. Salvatore Pede from the Prison Police, visited the Central Laboratory for DNA Database, established in 2009 and containing all the genetic profiling of persons detained, imprisoned or held in custody in Italy. Then, the delegation visited the Germana Stefanini Female Prison in the Rebibbia compound, which is the bigger female prison in Europe. On that same day, the delegation met the heads of the Central Investigation Unit (NIC according to the Italian acronym) which, in its capacity as Judicial Police Central Service, conducts, above all, investigations into organized crime and terrorism related to offences committed inside prisons or directly connected the above mentioned criminal activity. Then, the delegation visited the Mobile Operations Team (GOM according to the Italian acronym), which operates under the authority of the Chief of Prison Department and is responsible for managing emergencies and particularly dangerous situations, as well as for carrying out tasks related to the surveillance of prisoners subjected to special detention regime, provided for by Art. 41-bis of the Prison Regulation, as well as of detainees who are collaborators of justice.
Moreover, on 17 March 2022, the delegation visited the Terni-based Prison, which houses, above all, detainees subjected to high security regime, that is to say those prisoners who, altought are not subjected to the special “41 bis” regime, have been convicted for very serious offences. They are members of mafia-type organized crime groups, as well as persons accused or sentenced for crimes committed with purposes of terrorism, also international terrorism, or subversion of democracy by means of violent actions, and leaders of criminal organizations involved in drug dealing.