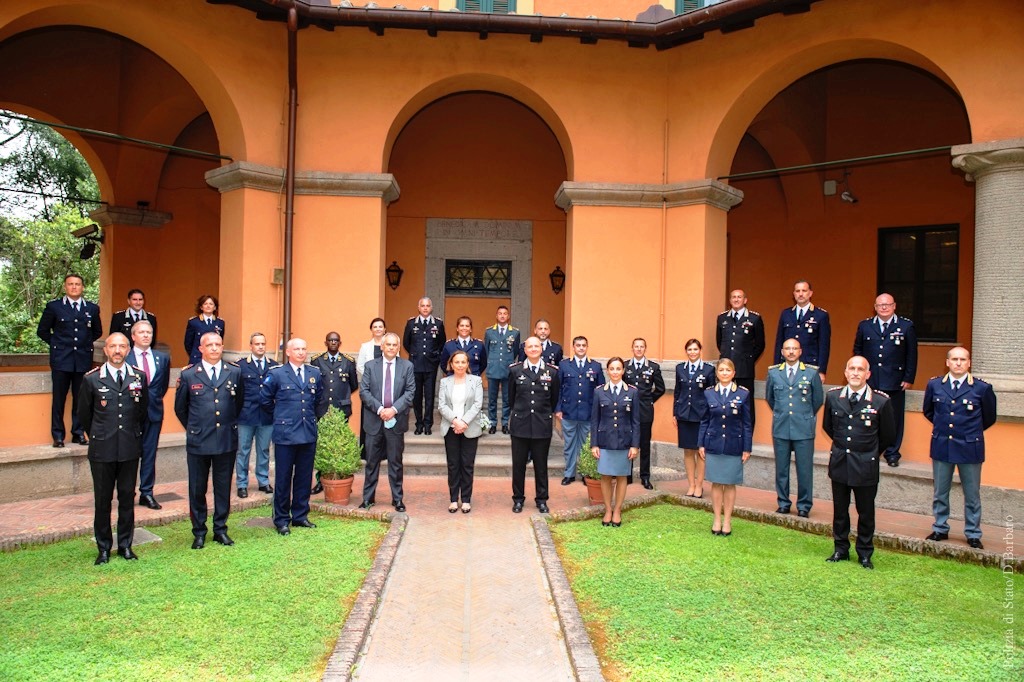 On 24 June 2021,  the XXXVI Advanced Training Course concluded an intense year of training activity during the closing ceremony of the Academic Year 2020-2021, which was held at the “Prefetto Carlo Mosca” Lecture Hall at the Interagency Law Enforcement Academy of Advanced Studies.

This event, which was held  both in presence and in videoconference, was celebrated in the presence of the Ministry of the Interior, Prefetto–State Councillor Luciana Lamorgese, the Chief of Police – Director General of Public Security Department, Prefetto Lamberto Giannini, the leaders of the  Carabinieri Corps, Guardia di Finanza Corps, Prison Police Department, as well as the Ambassadors, or their representatives,  of the 5 countries of origin of the  foreign auditors who participated in this course ( Albania, Brasil, Kosovo, Niger and United States).

The Academy Director,  Major General from the Carabinieri Corps Giuseppe La Gala, after recalling  the late Prefetto Calro Mosca, Senior Member  of the Academy board of teachers, who recently died,  delivered a speech and underlined that during the concluded Academic Year, in which the global threat represented by the pandemic has been faced, the Academy has showed its firm and resilient attitude  in delivering  its training activity and has chosen to  keep carrying out face-to-face  training activity  in favour, above all,  of the XXXVI Advanced Training Course’ trainees, so as to maintain the deep and authentic purpose of the  Academy mission: to reach  joint training and progress.

Then,  Academy Director described the main activities which have characterized the Interagency Law Enforcement Academy of Advanced Studies during the concluded Academic Year.

As regards the logistics, the Academy has been committed in undertaking a real “digital transformation” by means of the creation of a software and hardware   infrastructure to be used to organize videoconferences, multimedia links,  interconnection among  the classrooms in which the courses are held, as well as a portal which is devoted to training.

As regards training activity, some important initiatives were organized with the aim of updating the content of  the  lessons and researches on police and peculiar topics so as to be able to face the current challenegs and to fight against the increasingly globalized criminal organizations which are focused on the criminal  exploitation of digital technologies. In this framework, the European and international dimension of the Academy training activity has been strengthened.

For the first time since the institution of the II Level Master in “Security, interagency coordination and international cooperation”, the commitment of  the trainees of the XXXVI Advanced Training Course allowed them to get the full marks with honor and to demonstrate that they have developed peculiar  professional capacities.

The Academy Director concluded his speech and expressed his best  wishes to the XXXVI Advanced  Training Course’ trainees, encouraging them to remain united in the mutual respect of their diversity, with the awareness that they have worked together for a period and have established relations based on mutual esteem, friendship and confidence.

Then, the Ministry of the Interior, Prefetto – State Councillor Luciana Lamorgese, took the floor and expressed her best wishes to the trainees who have concluded their training activity at the Academy, as well as her hope for them to reach  their main goals both at human and professional level. Moreover, Prefetto Lamorgese recalled the main and deep added valued of the Academy, that is to say to create a special framework in which all the represesentatives of the different Police Forces, as well as their foreign colleagues,  can be able to meet and exchange their experiences.

As usual, at the end of the ceremony, the trainees of the XXXVI Advanced Training Course were awarded the attendance and completion certificate bearing the signature of the Interior Minister as well as the II Level Master Degree and earned the “Scuola di Perfezionamento per le Forze di Polizia – t.SFP” qualification (a special golden pin).

Then the closing ceremony was concluded.