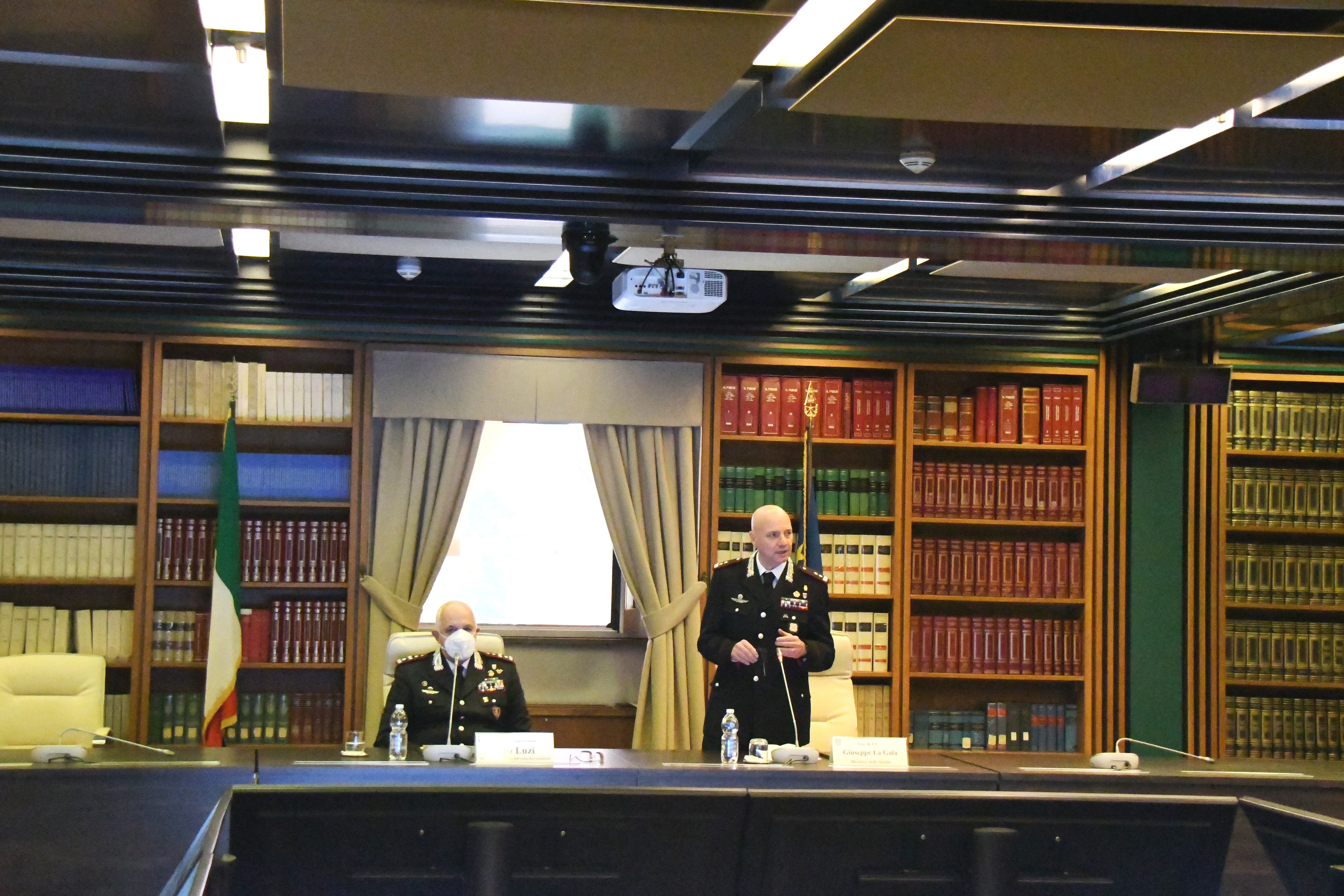 The series of meetings led by the leaders of the four Police Forces are carried on in the framework of the set of conferences scheduled to be held during the period in which the XXXVII Advanced Training Course is in progress.
In the morning of 13 May 2022, the Commander General of the Carabinieri Corps, Lieutenant General Teo Luzi, delivered a lecture on the topic: “The role of the Carabinieri Corps aimed at strengthening the security of citizens and promoting Italian interests abroad”.
In his lecture, General Luzi, taking into account the traditional dualism of the institutional activity of the Carabinieri Corps, which is responsible both for domestic security and external defence, underlined that this Corps carries out its activity according to different perspectives: an objective-subjective perspective (represented by the fight against crime as well as by social safety and perceived security), a general–special perspective (represented by the activity carried out by some special units which are competent in peculiar sectors regarding job and health safety as well as cultural, forestry, environmental and agro-food heritage protection), a national-international perspective (represented by international police cooperation, critical area stabilization and by the contribution provided to the diplomatic activity of the Ministry of Foreign Affais and international cooperation), and a real-virtual perspective (represented by the commitment of the Carabinieri Corps in the fields of cyber defence and cyber investigation).
The today meeting provided the Senior Police Officers/Officials attending the Advanced Training Course with a description of the increasingly wide-ranging security protection activity in our country, which involves not only public order and prosecution of crimes but also the stability of the whole nation state. In this regard, the activity conducted by the Carabinieri Corps is aimed at safeguarding critical infrastructures, ensuring production stability and securing militar and industrial secrets, thus supporting the free and peaceful exercise of national economic enterprise. This need is even more important in the current situation of general uncertainty due to the long pandemic emergency and to geopolitical instability. This situation will result in a lot of questions to be solved in the fields of economics, finance, energy, demography and environment. At the end of his lecture, General Luzi addressed his best regards to the Advanced Training Course’ trainees and quoted a sentence of Ernest Hemingway illustrating the total commitment and the faithful service which have been always characterizing the activity of the Carabinieri Corps: “Today is simply one of the days which will come but what you will do every day in the future depends on what you are doing today. It was like that a lot of times”.