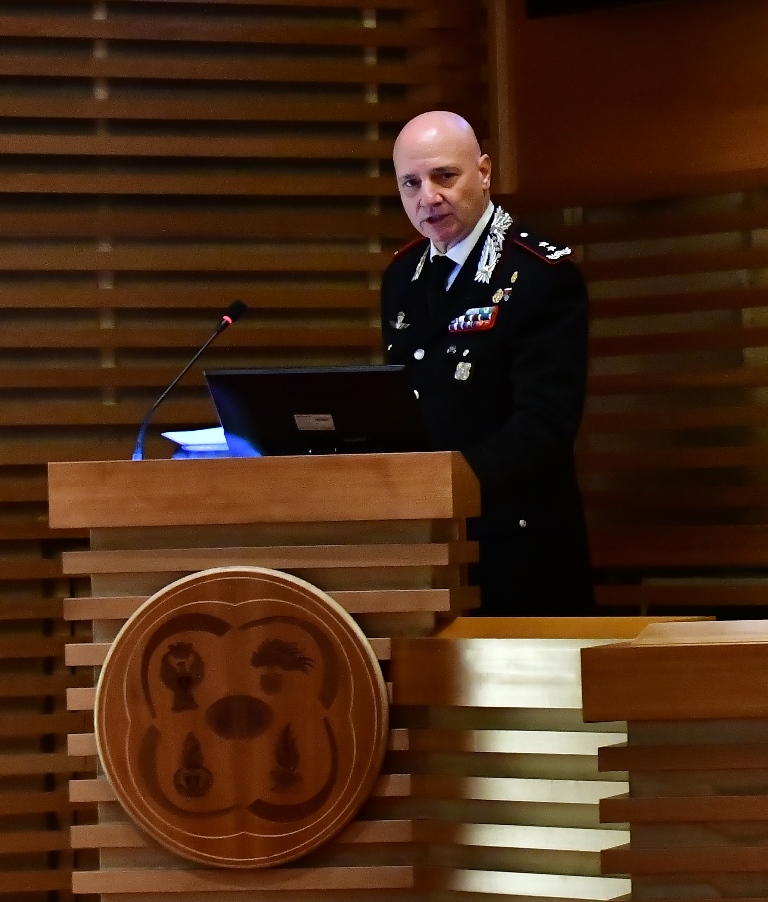 celebrated at the Interagency Law Enforcement Academy of Advanced Studies, in full compliance with the government provisions concerning social distancing and the ban on public gathering.

This event, which was broadcasted in live streaming on YouTube,  was held in the presence of the Minister of the Interior, Prefetto Luciana  Lamorgese, the Chief of the Italian Police – Director General of Public Security Department, Prefetto Franco Gabrielli, as well as the leaders of the Arma dei Carabinieri Corps,  Guardia di Finanza Corps and Prison Police Department.

The Director of our Academy, Carabinieri Corps Major General Giuseppe La Gala, delivered a speech in which he underlined the strategic guidelines of the Academy:  “internationalism, inter-institutionalism and decision-making skills”. These guidelines have been developed thanks to a structured cooperation with Universities and reserach bodies, together the Police Forces’ Coordination and Planning Office.

Moreover, the Academy Director emphasized the three qualities which must characterize the leaders of Public Administration: modesty, bravery and trust.

Then, the Rector of the Rome-based “La Sapienza” University, Professor  Antonella Polimeni, delivered a  lectio-magistralis on the topic “The  leadership in the complex organizations”. In particular, she pointed out that groups and organizations represent a vital part of the social and productive structure.  As a matter of fact, while being  complex, they represent a functional component standing between our external world  and our internal world:  “We ourselves” who cannot be identified with “me” but neither with “someone different from me”.

The event was concluded by the Minister of the Interior, Prefetto Luciana Lamorgese, who emphasized the cooperation between the Academic world and the  Advanced Studies Training of Public Administration leaders, pointing out the importance of the role of interagency and international coordination carried out by the Academy. The Minister of the Interior stated also that “the value of this institution is also represented by its capacity to create an international culture”.

Finally, The Minister officially declared the opening of the Academic Year 2020-2021.

Moreover, on that occasion,  the new Multimedia Conference Room of the Academy was officially inaugurated. It is provided with  modern control systems as well as with  video-conference and audio-video equipment.

The “ribbon-cutting” ceremony was held in the presence of all the Authorities participating in this event as well as in streaming connection with the Security Experts at the foreign embassies in Paris, Brasilia and Dakar.