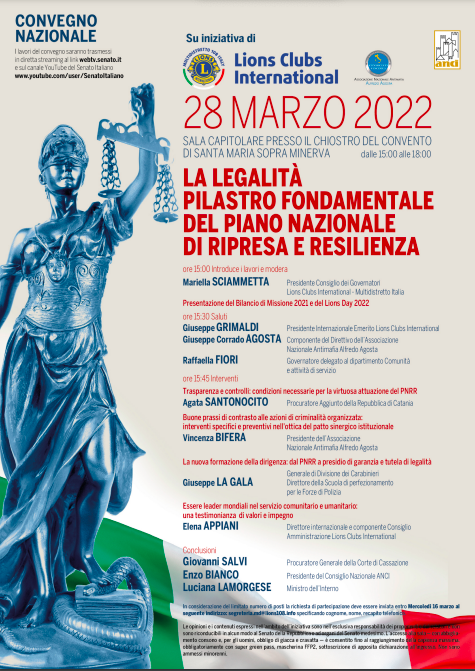 The training of Management Grade Police Officers/Officials, who are responsible for upholding legality to implement the PNRR, was the topic of the lecture delivered by the Director of the Scuola di Perfezionamento, Carabinieri Corps Major General Giuseppe La Gala, during the meeting on “Legality as the pivot of the National Resilience and Recovery Plan”, which was held in Rome on 28 March on initiative of the Lions Clubs International at the Sala Capitolare of the Senate of the Italian Republic. This event took place in the cloister of the Convent of Santa Maria Sopra Minerva.

The lecturers who attended this meeting were the Chief of Staff of the Minister of the Interior, Prefetto Bruno Frattasi, who participated on behalf of the State Councilor, Prefetto Luciana Lamorgese, the Attorney General at the Corte di Cassazione (the highest judicial authority) Mr. Giovanni Salvi, the Deputy Attorney of the Republic in Catania, Mrs. Agata Santonocito and the National Representative of the Lions Club International, Mrs. Elena Appiani. The President of the ANCI National Council, Mr. Enzo Bianco, concluded the session.
The participation of the Scuola di Perfezionamento in that meeting was an important token of appreciation for the Interagency Law Enforcement Academy of Advanced Studies, which has been engaged for almost 40 years in safeguarding legality and security to society in the exercise of the rights for freedom of its citizens.

In his lecture on “The training of Management Grade Police Officers/Officials: the PNRR and the need to safeguard legality”, the Carabinieri Corps Major General La Gala underlined the exigency to develop the measures provided for by PNRR in a framework of legality. Moreover, General La Gala highlithed the importance to set out clear objecitives and simple and straightforward procedures, along with the appropriate training of Management Grade Police Officers/Officials, who are responsible for connecting the objectives with the laws. In this framework, the Academy Director recalled the ongoing commitment of his Academy in the constant adjustment of its learning activity to the implementation of new training modules, in order to enable the selected Management Grade Police Officers/Officials to hold leadership positions and accomplish their missions with success in the next years.